How to make a leaders jersey? 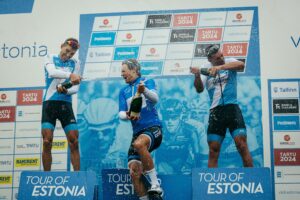 How to make a leaders jersey?

This year was the one hundredth anniversary of the Tour de France ‘Yellow jersey. The famous  jersey which indicates the leader of the race, has since been used worldwide in bike races to indicate the leader. Although the history of Tour of Estonia isn’t yet as long and prestigious, moomoo is proud to have been making the leader jerseys since 2016.

The Tour of Estonia is classified as a UCI (International Cycling Union) Europe Tour stage race, this status means that it can attract professional cyclists from all round the world, this helps to  put Estonian cycling on the map. The organisers behind the race, Club Tartu Maraton, have achieved a lot with organising this race as well as its accompanying cyclo-sportive event.

The fact that Estonia organises a Europe-Tour level stage race is exceptional because organising that type of event requires a lot of experience and work by a large team of people, as well as the large financial requirement needed to pay for it. These requirements are vital and never easy to secure but through maintaining these events, the positive experiences and knowledge gained are valuable in sustaining the sport into the future.

Creating the leader jerseys is a big thing for a cycling clothing brand especially when it’s being made for your home race. At moomoo we are proud that we are the ones who are making the leaders jerseys for the Tour of Estonia. These leaders jerseys are being given out to the race overall leader as well as others competitions (points competition, best young rider etc). In many ways this years jerseys were special but there was also some funny mishaps along the way…

The Leader jerseys for the Tour of Estonia consist of the following: A blue jersey for the overall race leader, a green jersey for the leader of the points competition, the king of the mountains leaders has a red jersey and the best rider under 23 years old wears a white jersey.

Work begins a few months before the event, the design is agreed with the race organisers as well as agreements on the correct colours and positions of sponsor logo’s

This year the jersey design remained the same as in previous years however one extra stage was added to the tour – a short prologue in Tallinn – this meant that one extra set of jerseys had to be awarded. This also meant that added considerations were needed, such as transporting the jerseys to the start of the 1st stage the next morning.

This year we set ourselves a new and altogether different goal: to make the Tour of Estonia the first tour in the world where the leader jerseys are made only from materials that are made from recycled materials. If we leave out the prototypes and our test shirts, then we can say that these leader jerseys were the first environmentally friendly jerseys that have left our building. This was truly the beginning of our  recycled materials kick-off!

To create clothes made from recycled materials does not mean we simply swap the fabrics for a recycled version. The way these fabrics work and interact is different. Although the Life-Cycle range is largely based on our moomoo Pro series range, we still had to make some changes to the design to better optimise the unique properties of the recycled fabrics. This does not mean we had to go back to the drawing board, but a lot of time was invested into making our new range suitable for recycled materials.

In creating the jerseys for the Tour of Estonia, we had to work to a very tight deadline, the last remaining fabrics only arrived to us a week before the tour even started. That was the reason why the modeling and making of the clothes was down to the last minute.

Unlike the other moomoo special orders, the leader jerseys were ready at the last moment, sometimes only a few seconds before they had to be presented to the riders! Added to that the logistics of getting the jerseys to the riders, meant that time was a great pressure. So what’s going on in those last moments?

One of the requirements for the leaders jersey is to have a spot on the front, for the team logo of the rider who is awarded the jersey. As the jersey wearers are only known once the race is completed, we needed to bring along to the race, special equipment for printing the logo onto the front of the jersey, before the podium ceremony was to begin.

To be the most environmentally friendly we made as fewer as possible jersey’s, although with all the calculations and tour days it still meant a total of 17 jerseys were needed. In the beginning we made nine jerseys, that meant in every category there were three different sizes (S, M and L). With that we were covered risk-free for the first stage prize giving and the second stage race, without worrying that somebody is going to get a jersey in the wrong size. 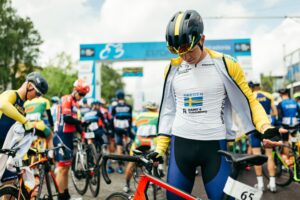 We handed over the first set of jerseys to the organisers on the Wednesday 22nd of May, a day before the race started in Tallinn. To have the jerseys ready with logos for the second racing day on Fridays stage 1 from Tallinn to Tartu, the jerseys were transported back to Tartu in the night and were then taken back to Tallinn early the next morning.

For the second stage, six more jerseys were made. Needed for the remaining two prize-giving ceremonies and Saturdays third stage, we usually are only making those sizes that have already been used. Just in case we have few extra jerseys.

The final stage of the tour was a circuit race around Tartu. With moomoo’s headquarters being so close, it seemed like there shouldn’t be any problems with making the final day jerseys.. But as in any bike race, the unexpected should be expected.

After the last stage is done and dusted, one of the requirements of the final prize ceremony is that the logo of the winners team needs to be printed on the leaders jersey. For that reason they leave a small gap between the finish and the prize-giving ceremony – a 15 minute gap. Because of this, we take the printing machine to the race and then quickly print the logo onto the jersey.

What about the leftover jerseys that are not being used? These are passed onto the race organisers to frame as a mementos from the event.

So after all that work involving around 10 people working in sewing, delivery, logistics etc the final jersey is only ready a few seconds before the prize ceremony begins!

Despite all the planning and our best intentions, some mistakes can still be made. Maybe it was because of the long night hours, the anxiety which came from making the first environment-friendly jerseys or something else. See exhibit A: 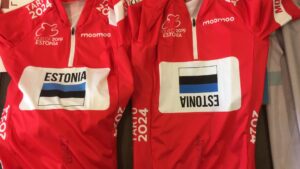 How can we make a mistake with such a basic thing such as our national flag? When printing the logo the details are upside down, the top edge of the jersey is down and the team logo is upside down.. With this print you can say our Tour was already off to a good start, luckily we had some extra’s just incase of mishaps.

For the last stage, we decided to give the printing duties to somebody else, somebody with lots of experience. However that did not help much as the exact same thing happened again for the Best Young riders white jersey, See exhibit B: 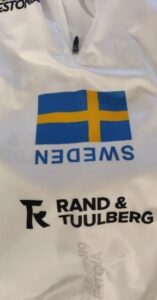 Never heard of Nedews? Neither had we!