The Blue, Black and White jersey 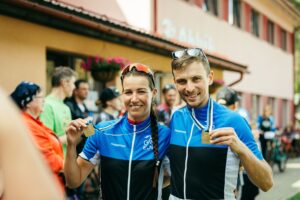 In a bike race, when you have lots of people together in a tight group, it can be very hard to identify which rider is the leader, sure it can be easy to spot when the race ends and the leader is the first one over the finish line – but what about for the rest of the race?

In football you have two teams on the field, each team has its own jersey design and colours, so it does not become difficult to tell the teams apart. In motorsport each car is painted a different colour and in tennis there are so few athletes on the court, that it’s easy to tell which is which.

This is the reason why the organizers of the Tour De France thought it would be very helpful if the leading rider would wear a jersey that stood out from the rest. So, the famous ‘yellow jersey’ was born. The Giro d’Italia followed after with its own pink jersey and soon each race had its own ‘leaders jersey’. But what about one day races like the world championships? How can you know which rider is the current world champion? Well that’s what the famous rainbow jersey is for.

Usually held one week before the start of the Tour de France in the start of July, the National Championships are a rare chance for riders to throw away their usual country (and in some cases team) loyalties and instead race to be crowded the champions of that country for the next 12 months. The most famous prize for winning a National Championships? The National Champions Jersey. The National Champions jersey is often designed like the national flag of that particular country. It almost looks like the jersey has been cut and sewn out of an actual flag. In a way this is the best design – seeing a group of riders coming along with one rider wearing what appears to be the tri-colour of Italy, would naturally suggest this rider was the champion of Italy. 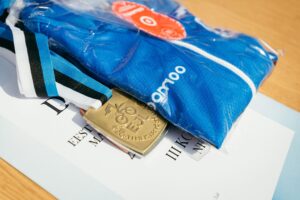 The Estonian champions jersey continues this tradition. Made up of three colours – Blue, Black and White, arranged in bands across the chest. The jersey looks as good on the champion as the flag looks when flying on the top of Toompea hill. Over the years we have seen this jersey at the highest levels – such as when Jaan Kirsipuu won stage 1 of the 1999 Tour de France in Challans wearing the Blue, Black and White or more recently when the current champion, Mihkel Raim won the Great war race in the jersey, live on Eurosport.

I wanted to find out when was the first year that the Estonian Champs jersey was awarded. The first time there was an Estonian Cycling Championship was in 1925 for track cycling, with the first road championships following a few years later in 1933. The records do not seem to mention when the first jersey was awarded. The earliest photo I can find of the Estonian Champs jersey is of Jaan Kirsipuu in the 1998 Tour du Poitou Charentes et de la Vienne. The topic of where and when was the first jersey awarded remains an open question – maybe for an upcoming blog post or if any historians or cycling detectives are out there then maybe they can shed some light in the comments. 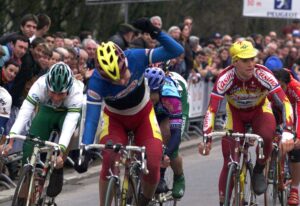 Winning the national championship and carrying the jersey on your shoulders for the next 12 months is known to have a positive effect on the rider. Often the rider is extra motivated when wearing the jersey. Such was the case for Alo Jakin (winner of the 2014 Men’s Road Championships). Alo’s results in the twelve months that followed his win, are some of the best results of his professional career. With a big win in the French one day classic – Boucles de l’Aulne – Châteaulin as part of the French Cup series and a podium place in the general classification of the prestigious 4-days of Dunkirk stage race amongst other results. Alo looks back on this period as his best season of his career and is proud that he was able to do it while wearing the champions jersey of his home country. The jersey also had a big effect on Alo’s team, as Alo explains, the year after his win in the Estonian champs, the team decided to change it’s team kit from the old red and grey it previously had, to completely new look of Blue with black and white. 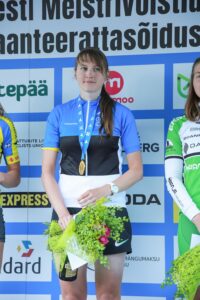 The effect that winning the jersey can have on the team of the rider is also an interesting topic. Liisi Rist, who won the Estonian Championships multiple times over multiple forms of cycling remembers the effect the wins had on her professional team back in Italy (S.C. Michela Fanini Rox). Riding the Giro d’Italia Feminine in her national champs jersey brought increased publicity and exposure on her and she was able to start on the front line of the race – this means increased coverage for the team and their sponsors – something that will undoubtedly have pleased the sponsors of the team. Liisi has won the National championships multiple times in not only road but also in time trialing, although it is her road wins that give her the best memories “I had always dreamt about racing in blue-black-and-white on the top level and suddenly it was a reality. With the national champion’s jersey I was recognizable and the other pros got to know me a bit better.”

Wearing the national champs jersey on the worlds stage also helped to promote Estonia, Liisi remembers how following her win, she would often be asked about Estonia from interested fans and that it was always a pleasure for her to introduce herself and her county to them.

The design of the jersey is known as blue black and white, but there are allowances for a riders team to make some modifications to the design from how it originally looked when presented to the winner at the end of the championships. This was a trend first started by Alejandro Valverde’s Caisse d’Epargne team in 2009, when instead of giving him a national champs jersey of red and yellow, they just gave him a red and yellow version of his own teams kit.

The UCI (world cycling governing body) are okay with changing the design as long as the national federation do not object. This trend has become more common over the years since and can be seen today in the form of Mihkel Räims current national champs jersey. The jersey, white with the national flag in the center is a modern take on the traditional look and was designed with Mihkel’s approval. Mihkel’s team even painted his De Rosa team bike blue black and white to match his jersey!

Mihkel has twice won the Estonian elite road champs and you can definitely see the benefit it has had on him, in the last twelve months since winning he has picked up some big wins, such as the Great War memorial race, a race shown live in over 50 countries on Eurosport which featured the legendary cobbled climbs like the Kemmelberg and recently his stage and general classification win of his home Tour of Estonia.

We at moomoo are once again proud to be the official maker of the Estonian National Champions jersey which is presented on the podium to each National Champion. This year the Estonian Road and Timetrial champs will be held in Viljandi from 27th to 30th June, with the Elite Womens Road Race on 29th of June and the mens race the next day on the 30th. Come down and bring the family to enjoy the racing and see who will be the next ones to wear the blue-black-and-white. 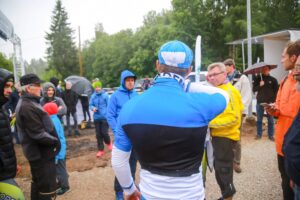