Generally, the outdoor season for most cyclists ends with the arrival of cold weather. Training in icy temperatures with cutting winds is not easy. But if you go out with the right mood, equipment and clothing, it can be a very rewarding experience to come home without problems and an icy bike during the epic sunset.

moomoo ambassador Rait Nurm aka Crazy Scandinavian talks about his winter cycling experience in a two-part blog series and then gives specific recommendations to those who want to try some winter cycling themselves. Rait is also a great help in the development of moomoo winter cycling clothing. 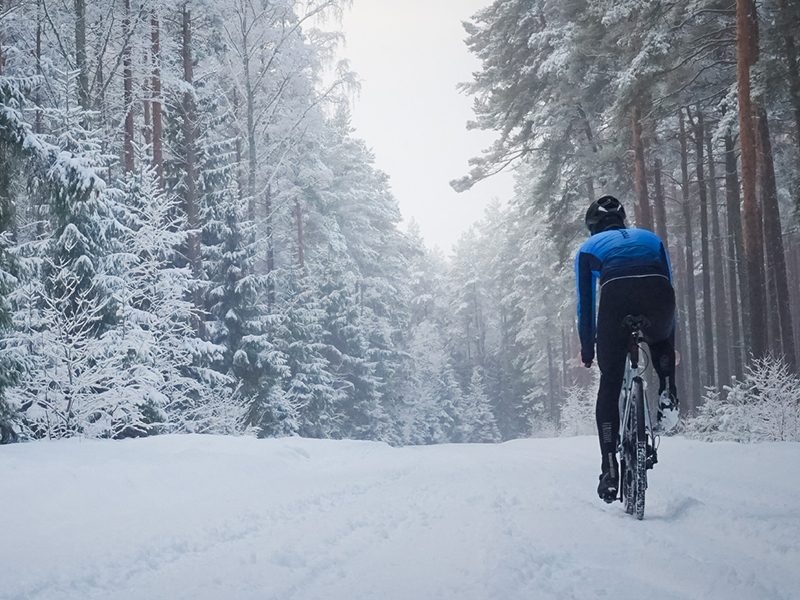 Getting to winter cycling

My first experience of riding in winter was about nine years ago when I lived in Vilnius. The traditional end of the season probably started somewhere in the beginning of November, by which time the degrees were already tending to go slightly below zero. I decided to invest in decent winter clothes. Thermal underwear, Castelli jacket and Sportful winter tights, thicker overshoes and decent gloves.
During my first ride with my new winter gear, an idea arose as to why end the season? When in fact you can ride calmly until it gets icy and snowy. As the snow came, I moved smoothly over to a mountain bike. Winters in Vilnius are quite crisp, with temperatures below -10 ° C being quite common. That winter, my record was -24 ° C and just under 2 hours of riding.
Since then, I have ridden more or less each winter, last year I collected a total of 7,500 km from November to April.

For the last three years, I have taken riding more seriously in the winter. It’s part of my workout, which means I keep cycling the same distances regardless of the weather or conditions. This in turn means more thorough preparation and investment in equipment is needed.

The question certainly arises as to why someone should ride a bike voluntarily in the winter, when the same thing can be done much more comfortably on a home trainer indoors? The aforementioned self-testing under very different conditions is one important reason. Understandably, this may not motivate everyone, but if you add fresh crisp air and some winter nature to it, then the idea does not seem so bad.

The healthy side of things is also important to me. In the past, it was common for me to suffer from sinusitis 1-2 times a year, but now I have not had colds or other seasonal illnesses for years.

If that still doesn’t motivate you enough, don’t forget Velominati rule # 9 – If you’re out riding in bad weather, it means you’re a badass. Period. 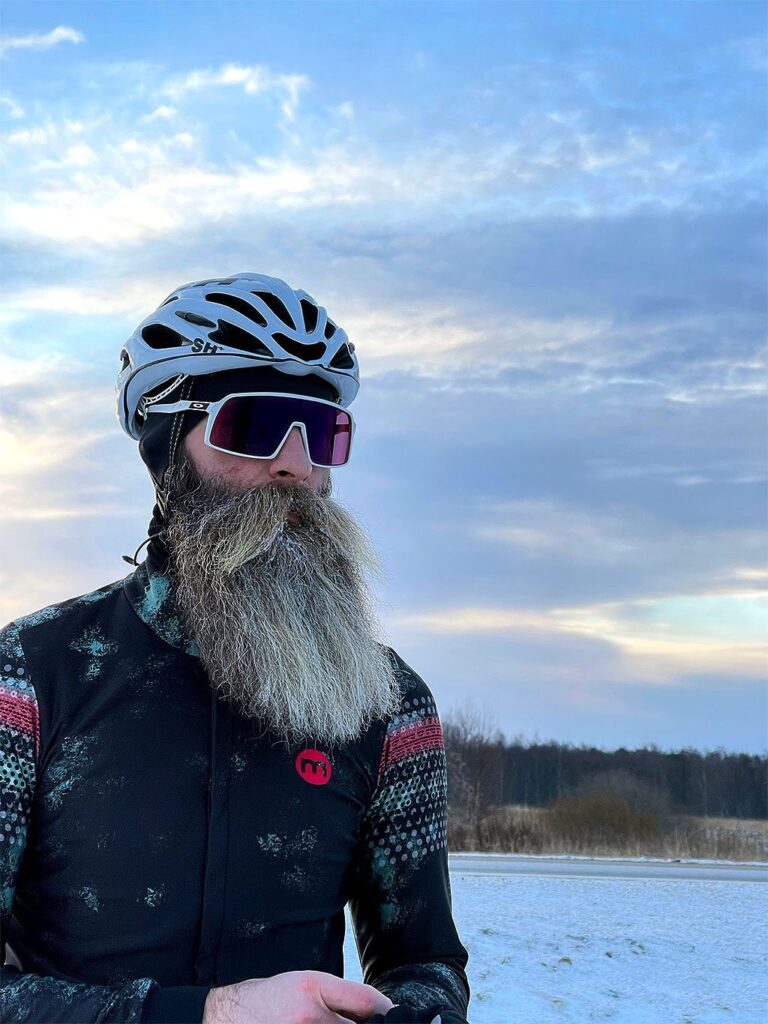 I started back with a 26 “alu Bianchi mountain bike, three years ago I switched to a 29” canyon. Almost 90% of the winter rides came on the highway, and scrubbing became quite blunt. In the autumn of 2020, I decided to upgrade to something a little faster, more convenient and more flexible. Gravel and cyclocross seemed too specific at the time, so the choice fell in favour of endurance in the form of a Focus Paralane. This bike is suitable for a fairly wide range of terrains and in summer it is a handy road bike for backup. It’s wide 35mm tire, can also be used to ride successfully on gravel if necessary.

The mountain bike has rarely been used since then, but it certainly has a place.

I am not a big fan of panniers and all types of bike bags, so I tend (with the exception of water bottles) to carry everything I need in my pockets. A good idea is to carry a small bag along during a winter ride to store things safely.

Over the years, I have found a relatively secure system for putting things in my pocket – the phone goes into the middle pocket, the screen towards the back. In this case, the probability of the phone screen being broken is slightly lower. You can also place your energy bars, for example, between the back of the phone and the pocket. There is a potentially good bumper in the spare side pocket, which can dampen a stronger impact, the latter I was able to “test” when I collided with a car in the autumn. Bike tools can be safer to attach to the bike

The equipment must always be in perfect working condition. I always follow this rule, whether it’s a bike or a car. Probably over the years, some mechanics have added a couple of grey hairs to my head. Maintenance is especially important in the winter and the colder the weather the more important it becomes.

The same goes for tires. If it can be seen that they are already starting to wear, the problem should rather be prevented by getting some new tyres rather than waiting for them to fail. At minus five degrees, changing a tire isn’t the worst, but with a temperature of -10 or lower, I don’t want to do it anymore.

If you plan to do more than a few rolls in the winter, it’s definitely worth investing in good studded tires. In the past I tried to avoid studded tyres because they slowed me down and are heavy, some regular tyres claim to have been tested on black ice, but at some point things will go belly up and the consequences are likely to be very painful. Since last winter, I have ridden Schwalbe Marathon Winter Plus studs and they will be on my bike until spring. These tires weigh almost as much as the wheels and the rolling resistance isn’t perfect, but it doesn’t really bother you when riding. The stud works great in icy conditions and in busy or fresh snow. while, snowfall and salt spray are kept to a minimum. 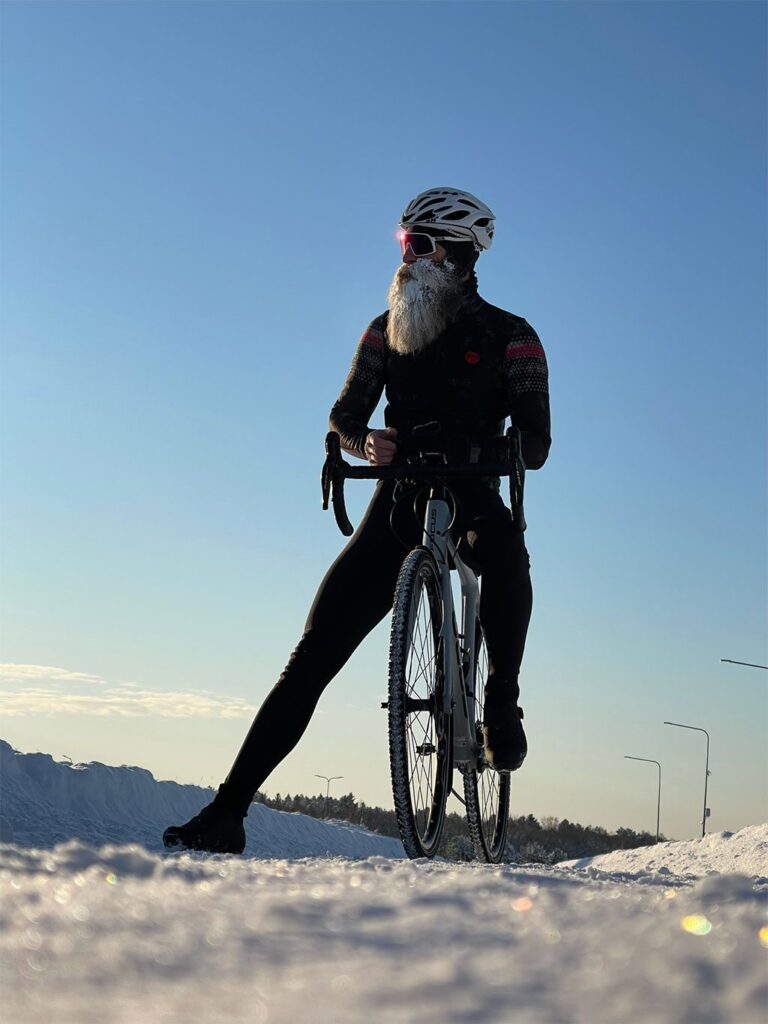 When buying a winter bike, one of the reasons for the choice was the factory-fitted fenders. Mudguards are certainly not going to earn you any style points and I was at first hesitant to ride with them, but the practical side outweighs the aesthetics in this case. Good mudguards are a big plus and that is why I went for factory fitted as they are stronger and more durable. Cheaper plastic guards become more brittle as the temperature drops.

Lights! They could be brighter. Preferring to ride on the road whenever possible, I consider the Garmin radar (Varia RTL515) to be completely indispensable in winter. Quite often the roadside is in a rather bad condition, the radar gives it an extra second to react to the traffic conditions. For example, on a narrow and snowy road where vehicles approach in both directions, you may have to ride on the sidewalk for safety reasons and not be able to attempt any sudden manoeuvres. The light is well visible even from far away and the flashing interval automatically becomes faster and thus more noticeable as the vehicle approaches. The main thing is that the lights are on, in working order and properly charged.

Always carry a phone on you so that you can contact someone if necessary. The lower the temperature, the faster the batteries discharge, so always make sure that the battery lasts until the end of the journey. I also recommend activating incident / crash detection if the worst happens. In this case, the device calls or sends the message to the specified contact. Newer cycling computers also support a live track feature that allows you to track your riding in real time and easily identify your location when needed. No matter how careful and cautious you are, falls will inevitably happen during winter riding, and it’s worth being prepared for.

Check the weather forecast. YR.no and Windy are two aids that are often used in the winter. Not only does it help you plan your route, but also to be ready for changes in circumstances. For example, if a gust is expected, the route can be planned according to the direction and timing of the wind so that it has as little effect as possible. It is definitely a lot of help in autumn and spring, when the temperature fluctuations can be very large – rolling out with sunshine and a few plus degrees, but you can get back with sleet or even ice rain.

A clean bike is a fast bike. Harmful factors such as salty snow, dirt and sand require the bike to be cleaned almost every time you ride. I have a well-established routine for this, the first thing I do when I get home is to wash my bike. First, I use a pressure washer or garden hose to remove more dirt, then immediately go over the chain and cartridge cleaner and brush. Then a cleaning agent (dishwashing liquid is also suitable) is applied. A rinse with pressure and then no less important – drying. I will start from the top, the transfer part will be the last. I do just that, because the chain should be dry before oiling. If I started from below, water would drip from the frame onto the chain. Then the new oil is applied and the excess, as always, is wiped off with a cloth or paper. When washing with a pressure washer, I take care not to let it get too close, and I also try to avoid directing water to moving places such as the axel, so as not to damage the bearings. 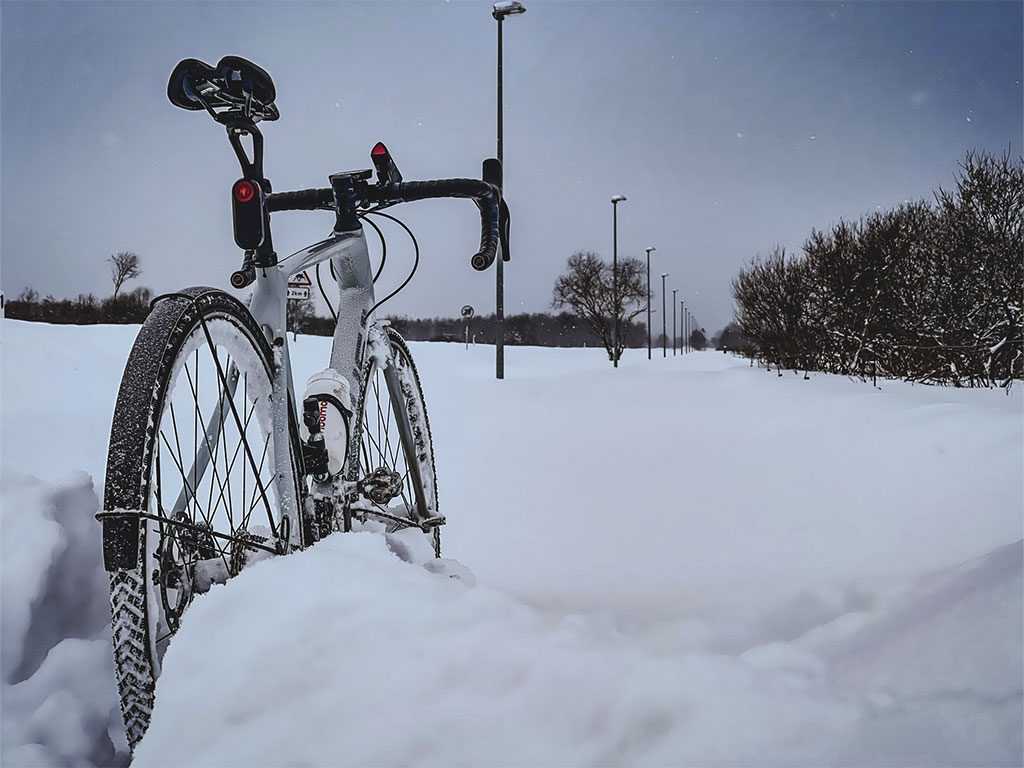 In the next part of the blog (published soon), I will give an overview of clothing suitable for winter cycling and share 5 recommendations for beginner winter cyclists. 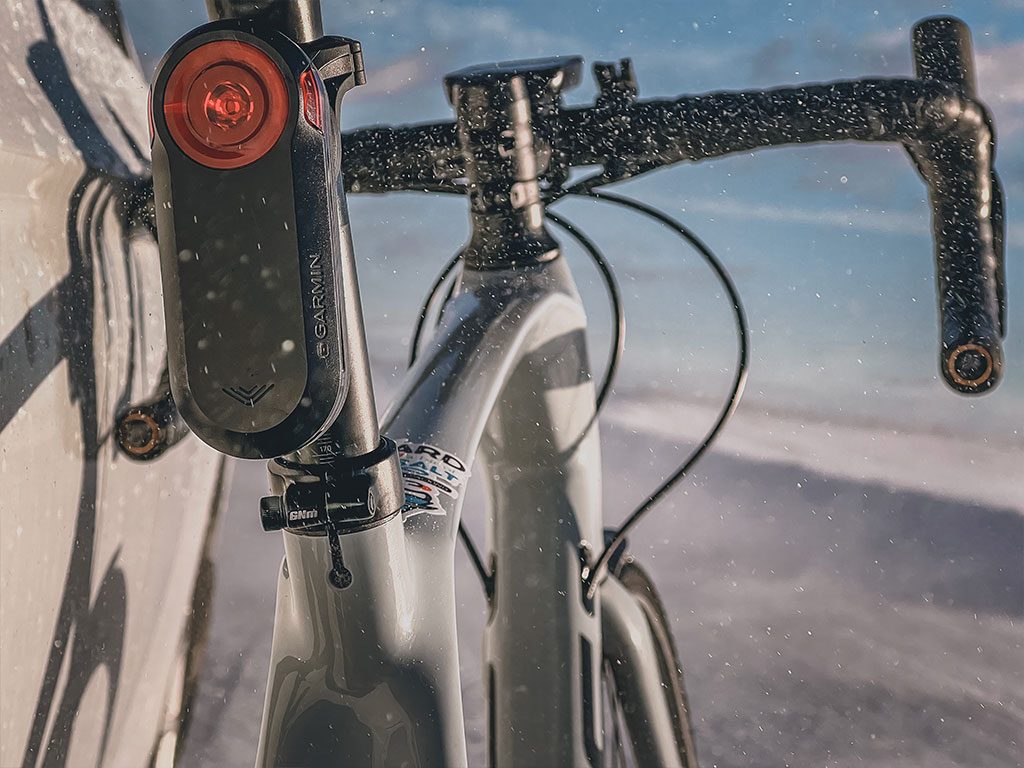 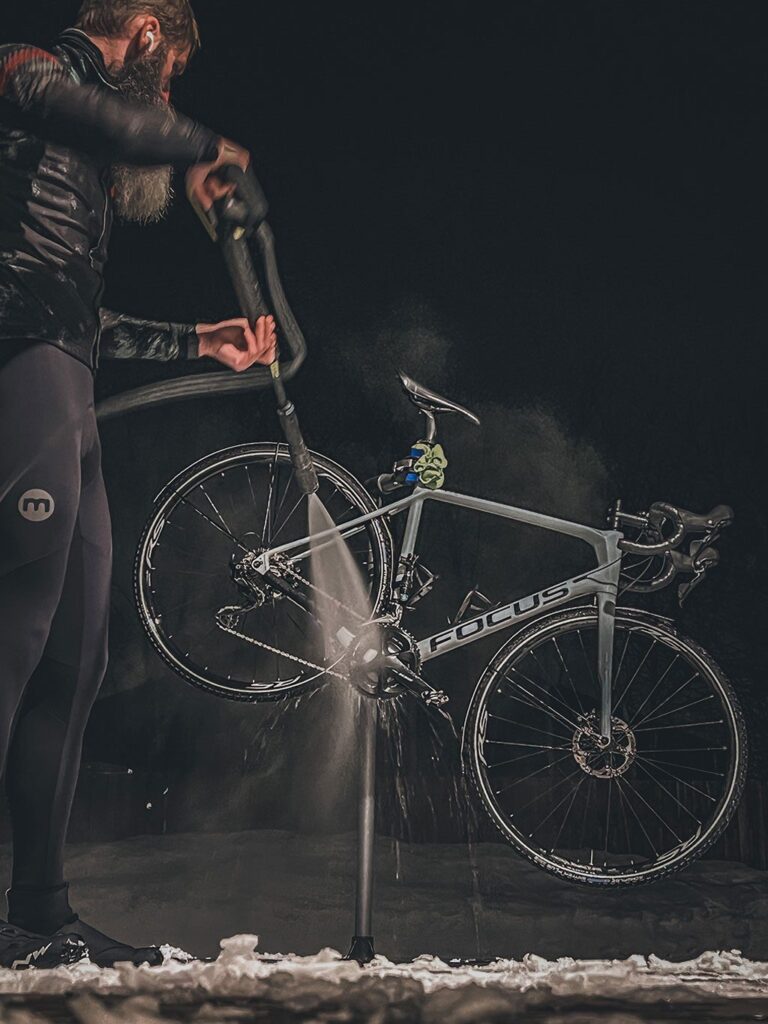